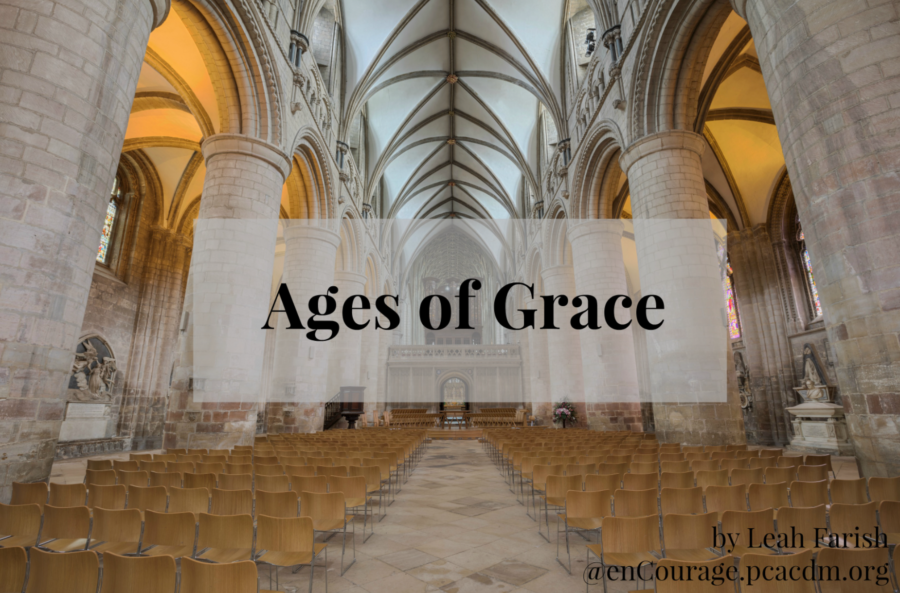 Do you ever wonder about our sisters in Christ who lived in other ages–and about what we have in common with them?  Our church decided to offer a women’s retreat with the title “Ages of Grace,” in which the teaching was by various characters who came to us with costume and music of their era.

The first talk began as the retreatants were settled on a Friday evening at a retreat lodge about 10 miles from our church.  Candles were lit, and some recorded music suggesting the chants of the early church ushered in one of our members, wearing a long white robe.  She spoke as Monica, the mother of Augustine.  Her message related to the years of prayer she offered for her unsaved husband, and for her rebellious son, especially when he “went off to college” in Carthage and then started his first job in the decadent society of Rome.  Monica’s prayers for both men were gloriously answered, but she told us with wit and gentleness how to persevere no matter what.  We closed singing the kind of echoing praise song that our music director found to represent early congregational song.

The next morning, our speaker was not a literal historical figure, but a figure who would be a typical 10th-century Christian in Ireland, named Caitlin.  Wearing a simple rough tunic, she told of the importance of hiding God’s Word in our hearts—for her, a necessity, since few women could study the Bible in medieval Europe.  This character shared an ancient (to her, current!) version of the hymn “Be Thou My Vision,” which we then sang.  Afterward, we had a craft activity making “Celtic crosses” of straw, and the option of a solitary “prayer walk” outdoors.  Two of our teen girls even demonstrated Celtic dances for us!

After lunch, Anne Bradstreet, Puritan poet, spoke to us about how her family and faith survived disease, eight childbirths, and even the burning of their grand house…