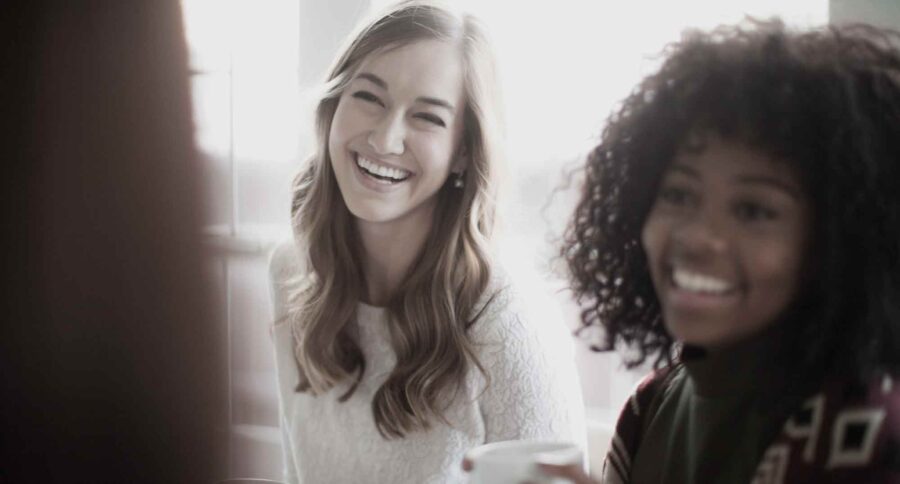 / in Devotional, Most Recent Feed

Events of the last couple of years have robbed us of several wonderful things, and one of them is laughter. Oh, we’ve had a few humorous moments—I recall trying to talk from behind a mask.  I wanted to ask an acquaintance, “Are your roommates nice?” and instead said, “Are your roommates mice?”  I suppose she could have said, “Yes–I wanted to get a cat and they won’t let me….”

And as we all resorted to written communication, typos abounded: “I loom forward to seeing you,” and “I’m drowning in the hot tub” when my friend meant “drowsing.”  I contributed this gem to one discussion: “I have a couple of other thighs to point out.”

Churches tried to market themselves online, which reminds me of one cheery offer—“Don’t go crazy in isolation; let the church help!”

My hope is that God will return joy and laughter to His people in the coming days.  Laughter is not something mentioned much in the Bible, but let’s compare two of those mentions.

In Genesis 18, we see Abraham’s wife Sarah, eavesdropping beside the tent flap where, outside, Abraham was entertaining three mysterious “men.”  Through them, God spoke to Abraham and said that Sarah would bear a son.  She was old, well past childbearing age.  So she “laughed to herself” at the idea of pregnancy.

Sarah may have believed the visitors hadn’t seen her, and she may have thought, “These guys think old Abraham has some nubile trophy wife—if only they had seen this bag of bones!  They don’t know what they’re talking about!”  In any case, she certainly thought she knew better: v. 12 says, “[S]he thought, ‘After I am worn out and my master is old, shall I now have this pleasure?”  But Scripture says that the men were actually speaking God’s message (v. 10), and God’s thoughts are higher than our thoughts.  He did know what He was talking about, and the prophecy of a son wasn’t just a promise; it was a prediction. She cynically failed to entertain the notion of the supernatural.  Her attitude was based on the visible, the fleshly.  At worst it was faithless and at best it assumed the same attitude in others.

Contrast this with the moment when God tells Abraham that Sarah will bear her a son, with “nations, kings of peoples” coming from her.  As God spoke directly to him, “Abraham fell facedown; he laughed and said to himself, ‘Will a son be born to a man a hundred years old?  Will Sarah bear a child at the age of ninety?’” (vs. 16-17)

There’s a difference between laughing at God and laughing before Him.  Abraham was not rebuked for his laughter or thought, and we must notice his posture in doing so: he was flat on his wrinkled face.  His laughter came from delight in believing, not scorn in unbelieving.  His celebration was full of awe, never forgetting the presence of the One who gave him this amazing news.

A similar moment came later when the gathered people of Israel were kicking off their practice of sacrificial offerings in their new tabernacle.  God sent out fire “from the presence of the Lord and consumed the burnt offering and the fat portions on the altar.  And when all the people saw it, they shouted for joy and fell facedown” (Leviticus 9:24).  This is one of my favorite verses in the Old Testament, as a huge number of people simultaneously witness a miracle and spontaneously respond, all together—sort of like a crowd at the big game jumping to their feet, laughing in triumph, and roaring with the thrill of a win, but, well, holier.

Aristotle said that tragedy in art always involves the triumph of the old order, and that comedy brings a reversal of the old.  Roman comedy and holidays often involved letting the servants be lords for a day.  Comedies very often end with a wedding, ushering in the new order, and so it is in the final book of the Bible.  We can rejoice now that in the future the last will be first, the mighty will be cast down, the dead will be up and dancing.  Surprises are in store!

Laughter involves a release of some kinds of tension.  Comedian Steve Martin has said that he actually tries to keep us amused, but without laughter, as long as possible, to build up the tension that then is released with when we eventually laugh.  Synonyms such as “crack up” or “break up” and “die laughing” suggest letting go, reminding us that stress of many kinds is released with a good bwa-ha-ha.  Almost all the words for varieties of laughter are humorous: chortle, titter, giggle, hoot.  Even the experience of laughing is a little silly; we make funny noises, our mouths open wide, our bellies may shake–we may fall down!  A good guffaw keeps us from taking ourselves too seriously.  It’s only given to humans to enjoy, so humans must need it.  It’s probably part of being made in the image of God…