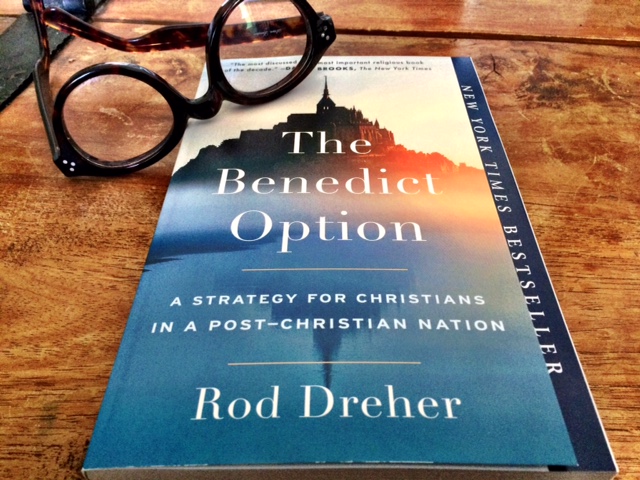 Orthodox (as in Russian Orthodox) author Rod Dreher’s new book, The Benedict Option, released on March 14, has rightly generated lots of discussion even among Reformed folks.  Based on the assumption that American culture is getting more hostile to the Body of Christ and to learning and civility, Dreher says that

The country is not ours anymore.  This is not our culture anymore. Maybe it never was our real home, but we have got to prepare ourselves and our families and our churches through intentional living, through disciplined living, and through an awareness of the cultural moment to deal with perhaps even persecution. See  https://world.wng.org/2015/06/rod_dreher_explains_the_benedict_option

Like Catholic Alasdair McIntyre, Dreher advocates forming “local communities within which civility and the intellectual and moral life can be sustained through the new dark ages.”  See http://www.catholic.org/news/national/story.php?id=34057

Of course, many Reformed friends in other nations know this alienation all too well, and we might first turn to them rather than to 7th-century St. Benedict of Nursia for models of how to live in this “cultural moment.”

Or we might even look to Scripture.  2 Peter 2:7-9 encourages persecuted Christians by reminding them that if God “delivered righteous Lot, who was oppressed by the filthy conduct of the wicked (for that righteous man, dwelling among them, tormented his righteous soul from day to day by seeing and hearing their lawless deeds)— then the Lord knows how to deliver the godly out of temptations and to reserve the unjust under punishment for the day of judgment.”  (NKJV).

What temptations assail believers as they see and hear lawless deeds from day to day?  Some of us have yielded to despair and bitterness.  Others have capitulated and compromised.  For some, the temptation has been to deny or ignore, turning to the comforts of entertainment and irrelevance.  Some have spent precious energy on blaming as they look backward.  Temptation to pride and hatred also loom.  But Peter promises two things based on God’s character:  He will deliver us, and He will judge evil.

Thus we do well to hold lightly Dreher’s assumption that we have lost the culture wars.  November’s broad electoral repudiation of a pro-abortion, pro-gay, big-government agenda (at state levels as well as in the presidential race), chastened movements to conserve cultural Christianity in Europe, and growth of the church in Africa and Central/ South America point in directions Dreher may have inadequately anticipated.  Finally, we know that only He “has the words of life,” so we know that people without Christ tend to keep looking for answers, broken and unsatisfied by the world.

We likewise should not assume that if the culture wars are lost, Christians will even be permitted to do the things he suggests we do, such as forming communities or starting other educational alternatives like homeschooling.  Most monasteries and convents through the millennia have lived under the protection of governments, some with sympathetic established religions, and the (sometimes grudging) admiration of the surrounding culture, yet what American Christians are now dreading is a viciously anti-theistic secular culture, and a government that will implacably demand shibboleths that believers refuse to pronounce.  It is nice to suggest becoming more like the Amish, but in the darkest scenarios we become more like the underground church in China or Saudi Arabia.

It is significant that Dreher is Orthodox.  Throughout its history, the eastern version of the Catholic church has been fairly withdrawn from its surrounding societies, and still today evangelism and high visibility are not its priorities.  The Orthodox taste runs more to fasting and taking tours of onion-domed churches in Russia than to refurbishing houses in Detroit, flash-mobbing the Hallelujah Chorus, or picketing abortion clinics…